As the spread of COVID-19 has affected most industries and economies worldwide, people have been forced to stay contained at home to prevent the spread of coronavirus. People have also been bored to death as they have nothing to do.

In this locked-up scenario, your best partner could be your Netflix account which contains thousands of interesting movies, series, and shows. We were discussing which brand to take up for this week’s case study, then one of our team members got an idea, let’s take the famous OTT platform Netflix which has managed to entertain a large population in no time.

Today, we are going to discuss the story of a platform that is providing us streaming services, or as we call it video-on-demand available on various platforms- personal computers, iPods, or smartphones. Netflix cut through the competitive clutter and reached out to its targeted audience by curating some interesting brand communication strategies over the years.

Let’s get into the success story of Netflix’s Journey.

Netflix was founded on August 29, 1997, in Scotts Valley, California when founders Marc Randolph and Reed Hastings came up with the idea of starting the service of offering online movie rentals. The company began its operations of rental stores with only 30 employees and 925 titles available, which was almost the entire catalog of DVDs in print at the time, through the pay-per-rent model with rates and due dates. Rentals were around $4 plus a $2 postage charge. After significant growth, Netflix decided to switch to a subscriber-based model.

In 2000, Netflix introduced a personalized movie recommendation system. In this system, a user-based rating helps to accurately predict choices for Netflix members. By 2005, the number of Netflix subscribers rose to 4.2 million. On October 1, 2006, Netflix offered a $1,000,000 prize to the first developer of a video-recommendation algorithm that could beat its existing algorithm Cinematch, at predicting customer ratings by more than 10%.

By 2007 the company decided to move away from its original core business model of DVDs by introducing video on demand via the internet. As a part of the internet streaming strategy, they decided to stream their content on Xbox 360, Blu-Ray disc players, and TV set-top boxes. The ventures also partnered with these companies to online streaming their content. With the introduction of the services in Canada in 2010, Netflix also made its services available on the range of Apple products, Nintendo Wii, and other internet-connected devices.

In 2013, Netflix won three Primetime Emmy Awards for its series “House of Cards. By 2014, Netflix made itself available in 6 countries in Europe and won 7 creative Emmy Awards for “House of Cards” and “Orange Is the New Black”. With blooming streaming services, Netflix gathered over 50 million members globally. By 2016, Netflix was accessible worldwide, and the company has continued to create more original content while pressing to grow its membership. From this point, Netflix was unstoppable and today it has a worldwide presence in the video-on-demand industry.

Business Model of Netflix
The platform has advanced to streaming technologies that have elevated and improved Netflix’s overall business structure and revenue. The platform gives viewers the ability to stream and watch a variety of TV shows, movies, and documentaries through its software applications. Since Netflix converted to a streaming platform, it is the world’s seventh-largest Internet company by revenue.

Now, let’s have a look at the business model of Netflix.
1. Netflix’s Key Partners:

2. Netflix’s Value Proposition: Netflix aims to provide the best customer experience by deploying valuable propositions. Here is how the online streaming brand strives to do so:

Netflix’s Revenue Model
Netflix gained major popularity when the platform launched online streaming services. Let’s have a look at how the platform earns.

Netflix was able to establish a well-reputed image worldwide and increased its customer base day by day. When it comes to giving competition, the brand has devised various digital marketing strategies and has gained wide popularity on digital media platforms. With the help of the best digital marketing services, they have kindled the excitement and craze in the people to travel and host.

In less than 4 years, Netflix has gathered a major share of the Indian market. Today a majority of households in India subscribe to Netflix, and that number is expected to rise this year and further in the years to come. The product is designed so well, that you remain engrossed in the content they deliver. They adopted top digital marketing strategies. Consult the best brand activation agencies. Further, let’s talk about a few of the digital marketing principles that Netflix has successfully implemented to gather customers.

1. Personalised Content Marketing: People love using Netflix because they get a broad range of things to watch. Netflix’s library of TV shows and movies from all over the world is there for consumers to choose from at any time.

The reason that Netflix won the personalization game is that its advanced algorithm continues to rearrange the programs overtime on the basis of your viewing history. Hire some of the best performance marketing agencies for personalized content.

2. Website Development: Netflix has designed its website with a user-friendly interface that allows customers to rate TV shows and movies, which then goes through Netflix’s algorithm to recommend more content they might enjoy. With the onsite optimization for the website, they have optimized each and every page for enhanced customer experience.

To easily get in the minds of customers, they have optimized their website for content by title, by an actor’s name, or even by a director’s name. By leveraging the best website development services, they added a host of personalization features to their website with clean looks no matter which platform you are using.

3. Email Marketing: Netflix tapped on email marketing techniques as a part of its digital marketing strategy and as a key component of customer onboarding and nurturing. New Netflix customers receive a series of emails that make content recommendations and encourage new users to explore the platform. Netflix marketers invest hours in building creative email marketing campaigns designed to engage and delight recipients. With the help of the best email marketing services, they continue to enhance the experience of the customers

4. Search Engine Optimization: Netflix makes use of search engine optimization services for the sake of improving organic research and establishing its brand presence. The brand aimed at the best search engine optimization services to drive traffic organically and adopted both on-page and off-page SEO strategies. They optimized their content with potential keywords that show up high in search results. They also tapped the strategy of International SEO to gain organic leads from the worldwide stage.

5. Social Media Optimization: Today, social media platforms have become an integral part of digital marketing strategy. If you want to connect with your audience in real time, then it is the best platform to establish your brand image. As social media plays a vital role in the lives of people, Netflix decided to leverage the best social media optimization services that made them earn billions. They made use of the following platforms:

Through creative social media optimization strategies, Netflix has garnered more than 61 million Facebook followers. In just one year, the brand added 11 million followers to its account. Netflix posts nearly 90% of videos and the rests images. Videos featured on Netflix’s 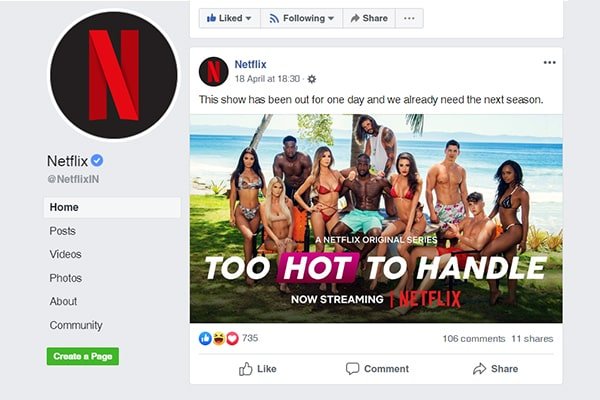 Netflix carries 19 million followers. The majority of Netflix’s posts on Instagram are images, post scenes from TV shows featuring engaging captions to get a conversation going, and behind-the-scenes clips and interviews with actors. A recent video featured a behind-the-scenes bloopers video from the set of Stranger Things, which garnered 1.2 million views and almost 3,000 comments. Netflix uses a simple approach to posting, with most posts not featuring any hashtags at all. 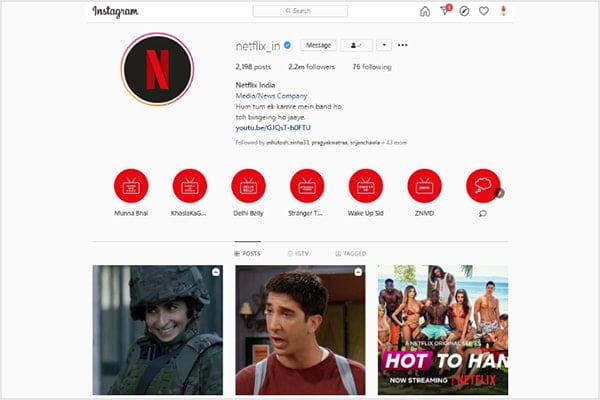 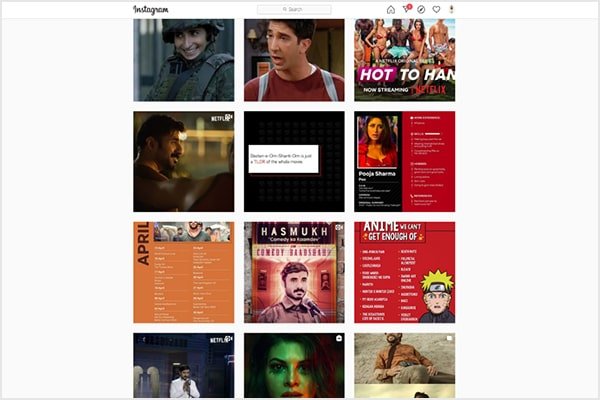 Netflix carries 6.8 million followers on Twitter and has tweeted over 30,000 times. Netflix is renowned for its witty replies and comebacks on Twitter, and the brand tweets an average of 14 times a day. This shows just how important engagement is for the brand and how much it values brand awareness.
These are the digital marketing techniques that the famous OTT platform adopted from time to time to the subscribers’ engagement and retention. Hence it has yielded high returns for their business.

1. Netflix: The Spoiler Billboard: Netflix’s new campaign uses spoilers of its most popular shows, including Stranger Things, Money Heist and Narcos, to promote social distancing amid the COVID-19 crisis, and while the effort is getting a lot of buzzes, it’s a fake.

2. FU2016: To launch season four of the political drama House of Cards, Netflix worked with BBH New York and built a fake presidential campaign around the show’s lead character Frank Underwood. The campaign became the top trending topic on Facebook and Twitter during the debate, and it won a Grand Prix in the Integrated category at Cannes in 2016.

3. The Censor’s Cut: The streaming company wanted to advertise Narcos Mexico in Thailand. Netflix worked with JWT Bangkok and cut around the offending images within each scene, leaving a clear enough outline that anyone could still identify what had been removed. The campaign achieved the opposite effect of what censorship is supposed to do by reaching 34 million people.

Conclusion
Netflix is a rare example of a company doing everything right. From its branding and content right down to its business model and product, the company has always excelled at
making smart, strategic decisions. With its large market share and focus on numbers, Netflix has managed to develop a deep understanding of its audience that very few others have. With this knowledge, paired with a strong, affordable product, there’s no limit to what this brand can do in the future.

Reach out to Digital Marketing Agency for the best marketing strategies among different marketing platforms.