Today, Shaadi.com is recognized as the world’s largest online matchmaking site, but in the year 1996, the business was founded with a simple sole objective of providing Indians all over the world with a premium matchmaking experience.

One of the digital marketing agencies in Delhi NCR found that in the initial days, Shaadi.com was a hit majorly among the non-residential Indians, because, during those years, the Internet wave was quite yet to come in India. So, conservative Indian parents were not comfortable in arrangements set through an Internet-based startup.

Interesting fact: The matrimonial brand was initially known as Sagaai.com, but later rebranded as Shaadi.com when the startup owner, Anupam Mittal, believed it to be a more marketable name.

As the years passed by, the audience grew fond of the Internet, and the business witnessed constant success. By the year 2008, Shaadi.com had already become the world’s leading matrimonial site for Asians and by the year 2011, the brand was supporting over twenty million users to find their better halves.

To keep the members engaged on the platform, Shaadi.com introduced a video calling feature for the premium members, to connect and interact with their match, and offered an opportunity for the users to express themselves and enjoy their first meeting online.

Shaadi.com’s achievements throughout its journey:

2012: The brand launched a Facebook Game – ‘Angry Brides’, which shed light on the dowry abuses in India.

2014: Initiated Shaadi Cares to educate the audience about the common marital issues.

2020: With over 250 centres across India, Shaadi.com presently offers first of its kind services from matchmaking to wedding planning.

The best digital agency in Gurgaon explains that the matrimonial site follows a pretty simple revenue model – the journey begins with a free registration on the platform and then the users have access to wander around multiple profiles filtered based on predefined categories. These filters could be basic or advanced, increasing the level of search specifications.

Once the user finds a match, any of the party has to purchase a membership to begin communication. For this subscription, there are multiple options available for the users such as Gold Membership for 3 months, Diamond Membership for 6 months, and Platinum membership for a year.

#ChallengeNo.1: A portal of this nature has a great possibility of attracting spurious profiles and might be misused as well. To earn the trust of the users, the company needed to maintain the authenticity of the profiles on the platform.

Solution: To face the challenge, the company ensured that each profile going live on the platform is first verified and goes through screen profiling. This security measure includes the mobile number verification, verifying through Identity proof, and social media connections.

#ChallengeNo.2: While growing constantly over the years, the business operations needed to grow and innovate, but the hosting services were too limited for the brand to achieve its true potential.

Solution: Acknowledging the need for change, the brand shifted from the hosted private cloud to Amazon Web Services (AWS) which allowed the business to eliminate complex management, increase speed, and support expansion for the operations. The best website development company in Gurgaon found that Shaadi.com was able to bank upon multiple other benefits that came in-handy with the AWS services, such as:

Tapping into the culture to create value:

With the culturally sensitive Indians as its target audience, the company understands their behaviour and has certainly left no stones unturned to provide the best experience to its users. To provide perfect matchmaking services based on the user’s preferences and choices, the brand re-designed its filters based on region, mother tongue and caste.

No surprise the business has made its way in the global market and is now present in numerous countries, out of which, India, USA, Pakistan, UAE, Canada, UK, are amongst the most popular audience.

With such a great understanding of the audience’s behaviour, culture and values, Shaadi.com never missed an opportunity to connect with the users via its social media and video marketing campaigns.

Let us have a closer look at the marketing strategy of Shaadi.com, which helped the brand to establish itself amongst its budding competitors, and make its way to the top of the matrimonial segment:

There is no doubt that the Shaadi.com marketing team understands the power of social media and knows exactly how to leverage the huge percentage of the population across the world on the platform.

This could be seen in the brand’s Facebook and Instagram pages, which are designed very smartly to communicate the desired message while lightning the mood by tapping on the entertainment ‘fun’ side of the platform: 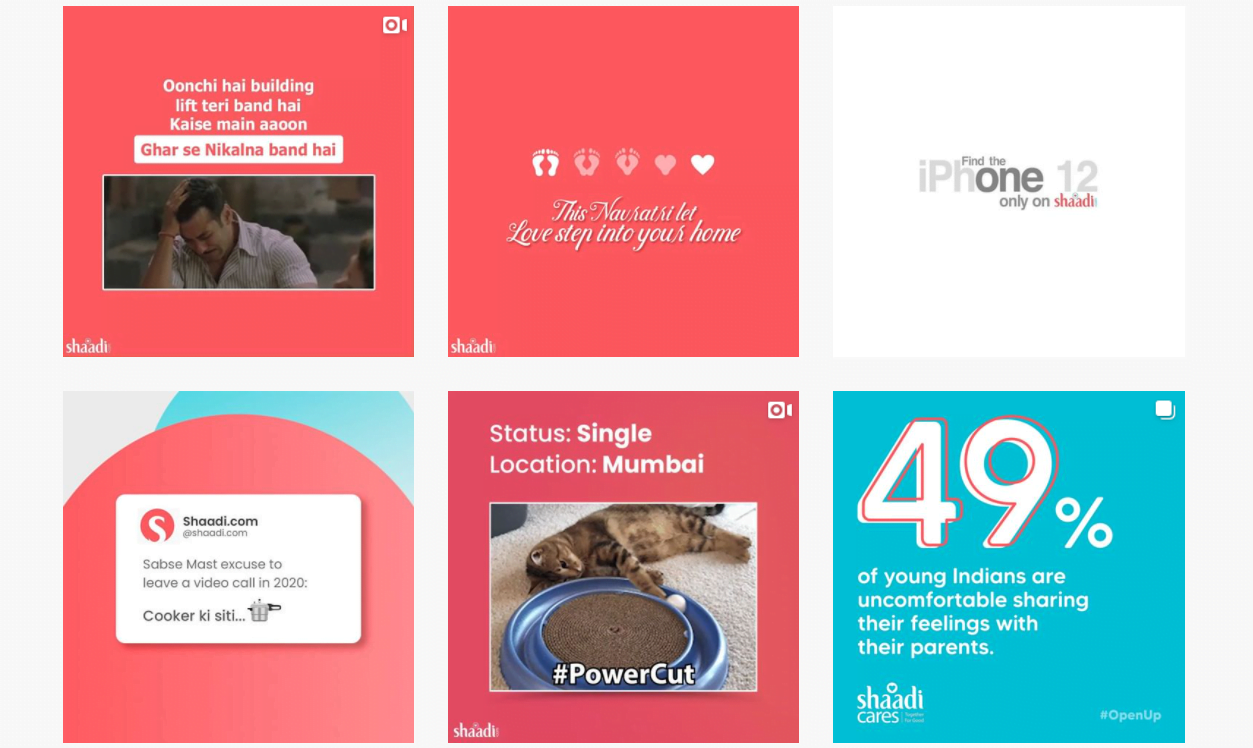 The leading social media marketing agency in Gurgaon appreciates the social media tactics of Shaadi.com, as most businesses fail to leverage the power of social media the right way.

Shaadi.com has practically proved that anything is possible with technology in its “The Great Indian Lockdown Wedding” campaign, as a response against the nationwide lockdown.

While the whole nation was under lockdown because of the widespread pandemic, the brand did something ‘that was’ never heard before.

When most of the marriages were being postponed because of the lockdown, Shaadi.com denied accepting the barrier and came up with a way to get the couples married virtually while staying in their own homes. The whole event was organized by Shaadi.com for both the families and the wedding videos were shared on Instagram via IGTV video feature. This video has witnessed thousands of views, which clearly depicts that the brand has not just cracked the Social Media Code, but the code to their user’s heart!

Hosting games and contests has always been Shaadi.com’s special ingredient for encouraging awareness in the society. In 2012, The brand introduced a video game called ‘Angry Brides’ on Facebook which gained popularity and was largely appreciated for sending across the message to the patriarchal society with a fresh perspective. 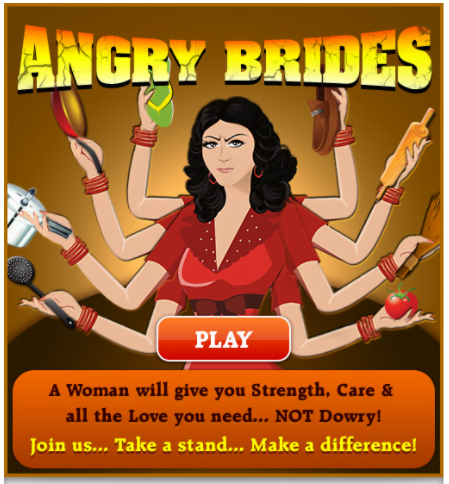 This game was specifically designed as an effort against the evil practices of Dowry in India, where the player role-plays an eight-armed woman, and players strike target grooms who demand a large dowry.

The concept behind the game was impeccable and was appreciated by over 6,00,000 people from more than 35 countries and even won the Bronze at the 4th Internationalist Awards Held in New York.

This campaign was another effort by the matrimonial leader to shed light on another societal issue – inequality. During the occasion of Karwa Chauth in 2014, the brand decided to turn the tables and gave a chance to the men in relationship, to fast for their partners as a way to express their love and value. And, of course for long lives!

The Campaign was led by a video featuring some of the trending Television celebrities such as Chetan Bhagat, Varun Badola, Hiten Tejwani, Sulaiman Merchant and many others.

The social media optimization company found that the brand even created a microsite which tracks the number of people who have taken a pledge to support the programme. The #FastForHer campaign was a big hit for the company and: 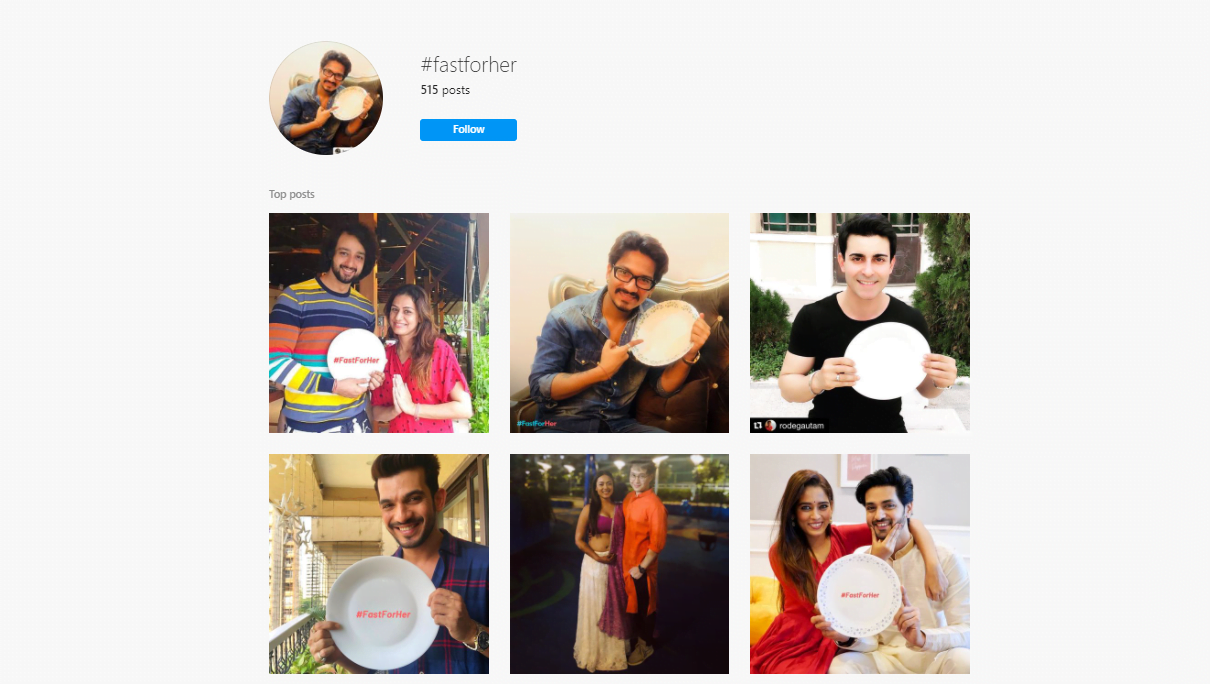 The best digital marketing company in Gurgaon believes that sharing user testimonials and reviews is one of the most effective ways to earn the trust of your audience, and Shaadi.com has played its card right by sharing the stories of people they helped find perfect connections.

“Real People Real Stories” is a campaign which includes testimonial videos published on Youtube and social media platforms and has gained millions of views for the brand, over the years.

The matrimonial brand decided to run a TV commercial with the goal to give a fresh image to the brand. This commercial was created to reflect the modern progressive Indian women.

The TVC campaign was named ‘My Conditions Apply’, and features multiple women laying down their marriage conditions (in a very polite way).

Quick Fact: This campaign was much appreciated by the society and saw over 3,50,000 unique views just on YouTube.

With a huge competition in the matrimonial industry, Shaadi.com understands the significance of an interactive design to keep the potential clients engaged with their platform.

Which is why the brand has opted for an amazing web design which is:

While analysing the marketing journey of the world’s largest matrimonial brand, one of the best digital marketing companies in Delhi NCR found that Social Media Engagement has played a significant role in boosting awareness among its audience. Also, Shaadi.com’s unique approach of raising awareness about the multiple society issues have been impeccable in engaging users while enhancing the brand’s credibility and trust in the minds of the user. 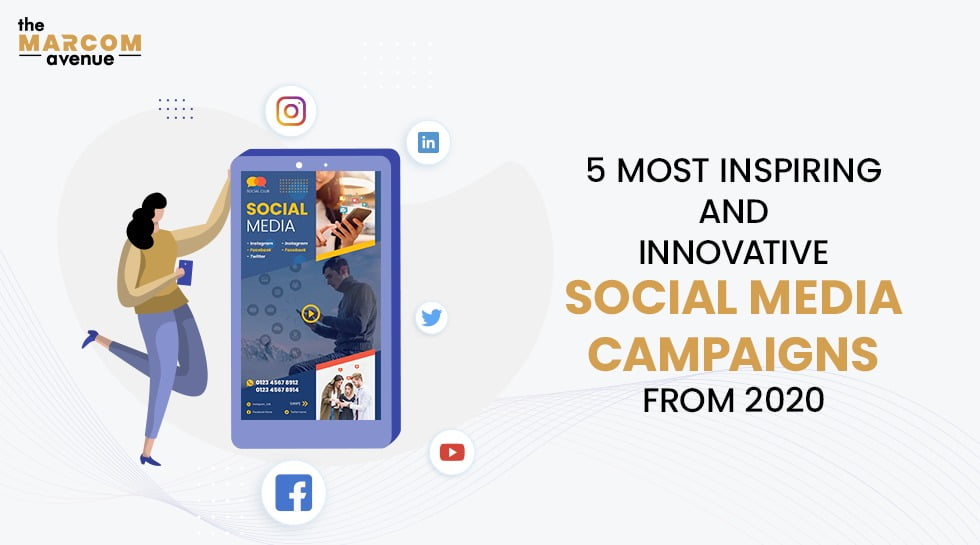 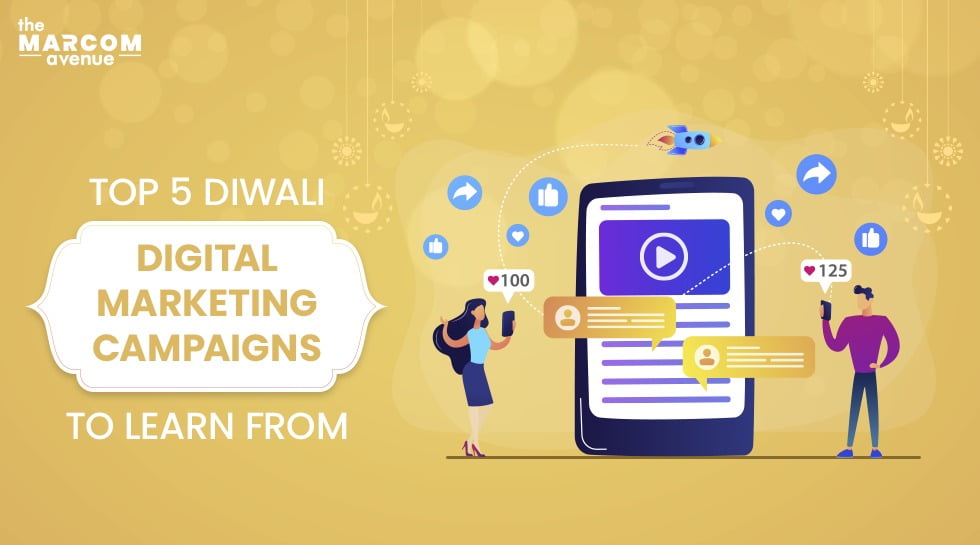 Spotify’s Phenomenal Launch in India: What were the Secret Ingredient(s) behind it? 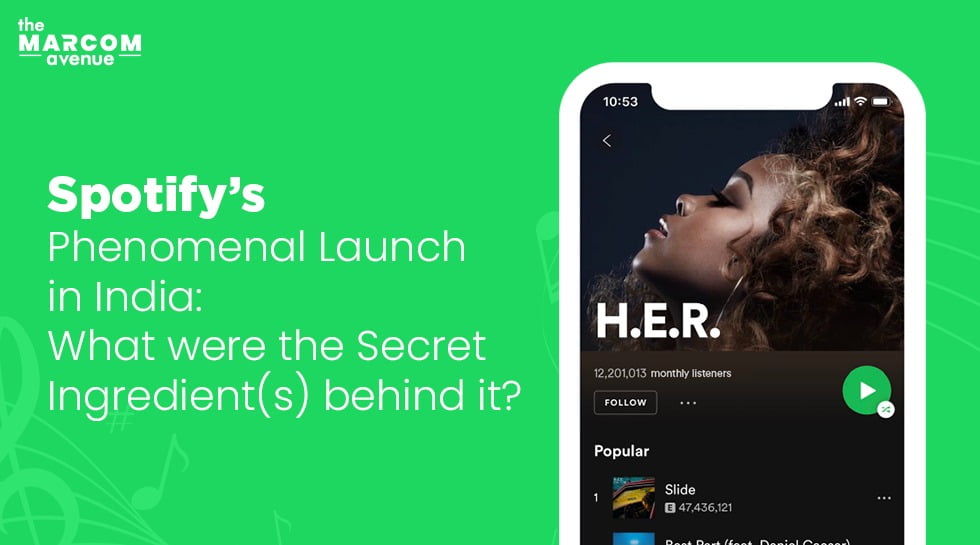 What is Spotify? Spotify began its journey in the year Read more 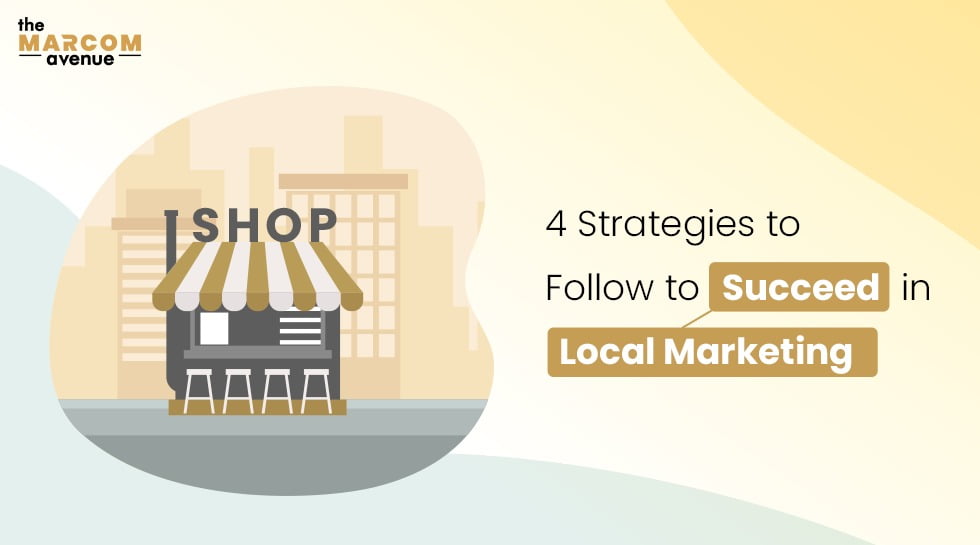 Did you know that according to a study by Hubspot, Read more 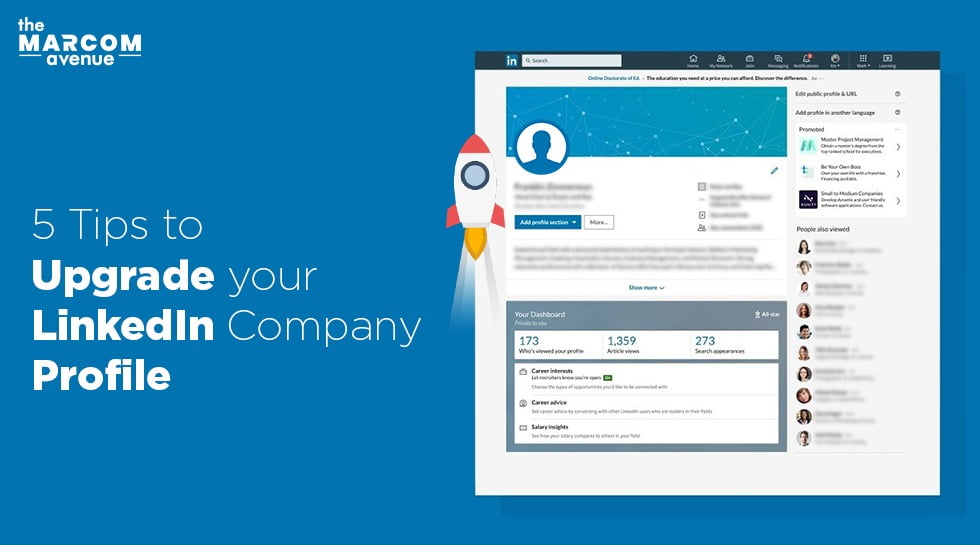 With over 575 million registered users, LinkedIn is undoubtedly one Read more